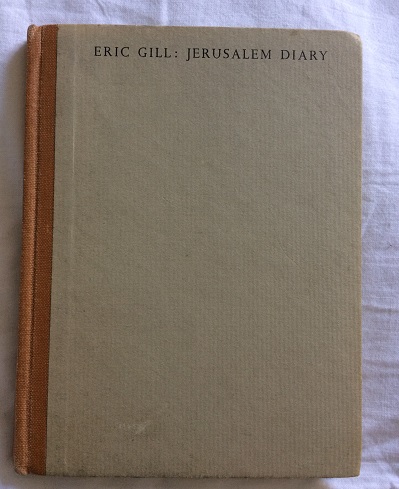 From the Jerusalem Diary of Eric Gill

Buff paper-covered boards with title in black on front cover. Orange-brown cloth spine. Condition: Good. Foxing to endpapers and sporadically throughout book. Previous owners name in pencil on front endpaper. Binding cracked internally in one place. One of a limited edition of 300 copies, this is no.270. 59pp. Edited by Gill's wife Mary, this book contains extracts from the diary Eric Gill sent his wife on his way to Palestine, giving his impressions of the Holy Land. He regarded his journey as much a pilgrimage as to a place where he had been commissioned by Austen Harrison to carry out some work. 10 b/w photographic illustrations of carvings made by Eric Gill c.1934 around the courtyard of the Rockefeller museum in Jerusalem, which opened to the public in 1938.. They present the various civiliszations which formed the cultures of the land of Palestine.

Title: From the Jerusalem Diary of Eric Gill

From the Jerusalem Diary of Eric Gill