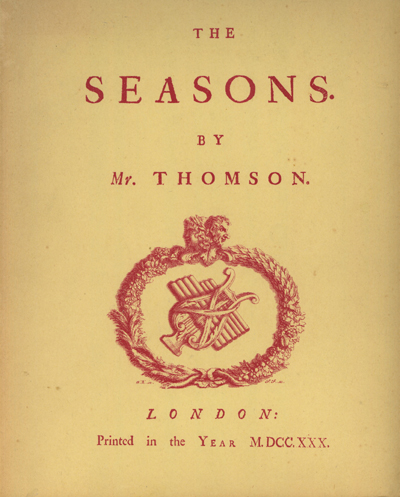 Originally published in 1730, this version was reprinted in 1970. Cream card covers with title in red on front cover and spine. Condition: Good, with general light shelfwear and sunning to covers. Binding sound, no inscriptions. 252pp. (including an 11 page poem dedicated to the memory of Sir Isaac Newton) plus a 16 page poem entitled Britannia and an 8 page paraphrase on the latter part of the sixth chapter of St.Matthew. The Seasons is a series of four poems written by the Scottish author James Thomson. The first part, Winter, was published in 1726, and the completed poem cycle originally appeared in 1730. The poem was extremely influential, and stimulated works by John Christopher Smith, Joseph Haydn, Thomas Gainsborough and J. M. W. Turner among many others. Size: 4to - over 9¾" - 12" tall